No one more appreciates a bargain than a budget-minded traveler, especially in Tel Aviv, where just about everything can be hard on your wallet.

Whether it’s airfare, transportation, lodging, dining, or shopping – shaving a few greenbacks off your vacation spending means you either reduce your overall travel expenses, or you’ve got some extra coin to splurge on something else. Regardless of whether you spend it or save it, an unexpected bargain is always welcome, and the 5 shekel ($1.30 or 1.15 Euro) craze that has taken Israel by storm is a windfall for tourists and locals alike, allowing us regular folk to enjoy some of life’s finer pleasures without breaking the bank.

Since the first Cofix branch opened on Ibn Gabirol almost two years ago, 5 shekel coffee houses have been spreading like wildfire throughout the country, with Jerusalem and Tel Aviv literally bursting at the seams with competing branches. Whether it’s Cofix, Cofizz, or a no-name neighborhood kiosk that suddenly jumps on the bandwagon, it’s not unusual to find two or three of these popular cafes within a one-block radius.

Stationed on all the main drags (King George, Dizengoff, Ben Yehuda, Allenby, and Sheinken Streets), Cofix was conceived as a “take-away” setup for customers on-the-go, but since then has morphed into a place where people sit down to eat, drink, converse and relax while saving more than a few shekels.

In addition to the budget-friendly coffee, the 5 shekel café’s have offer a host of other goodies, like  mini sandwiches, croissants, focaccia, pretzels, pastries, ice cream, sodas, granola bars and candy bars, among other treats. You can actually satiate your taste buds shockingly well at these establishments — if you know what you’re doing.

As such, with your budgetary concerns, as well as your gastric tolerance in mind, we’ve made the rounds of Tel Aviv’s plethora of 5 shekel cafes to provide you with our top picks for options truly deserving of your 5 shekel coin.

Tel Aviv is one juiced-up city, and there is no shortage of kiosks ready to squeeze, press, and whizz summer’s seasonal treasures into a healthy fruit shake or smoothie per your specifications. If you’re watching your cash-flow, however, this indulgence may be a little too rich for your wallet.

However, there’s no need to abstain anymore. Go ahead and splurge on the occasional exotic fruit-refreshment, but balance it out with a straight-up shot of fresh-squeezed for only 5 NIS. The selection is typically limited to fresh-pressed carrot, orange, or a 50/50 combo, but it’s made-on-the-spot and there’s nothing more refreshing than a glass of fresh-squeezed.

When the first Cofix opened, the food menu was mostly limited to a selection of cheese sandwiches, tuna sandwiches and omelet sandwiches. And although they were exactly what you would expect from a basic sandwich, they didn’t offer much variety. Little by little, however, new items began popping up on the menu and today, Cofix offers a surprisingly tasty selection of hot meals. Vacuum-sealed in microwaveable containers, this stuff actually tastes good! Hot entrees include Pasta with Tomato Sauce, Asian-style Noodles with Vegetables, Ptitim (Israeli toasted pasta), Majadara (rice with lentils), and my personal favorite, quiche! Yes, you can order a mini onion or sweet potato quiche that honest-to-goodness tastes as delicious as any I’ve eaten in a “regular” restaurant. Of course, it’s small, but order two or three and you’re still paying significantly less than you would at any regular establishment. 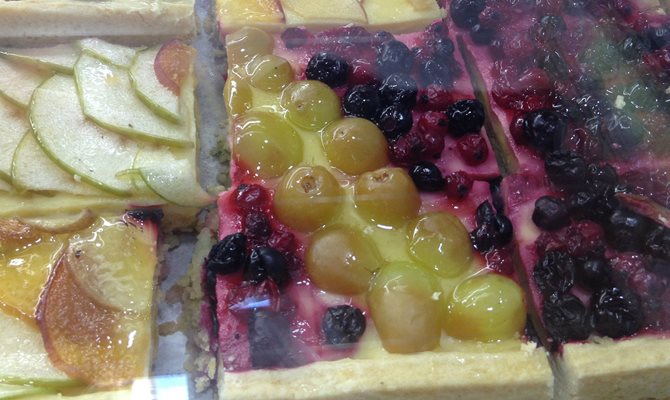 If you’ve got a sweet tooth, you’re undoubtedly aware that at many Tel Aviv restaurants the price of dessert comes alarmingly close to the price of your entree. What’s up with that, anyway? For a slice of decadence, it’s like you’re buying the entire pie!

Well, no more! Although the fanciest desserts at Cofix are limited to cookies (you honestly can’t go wrong with the Alfajores 2-pack) or small, sealed bowls of chocolate mousse, malabi, tiramisu, and something that resembles cheesecake filling, the generous squares of sweetness from Cofizz easily rival desserts founds at pricier establishments. The selection varies by location and includes cheesecake, layered caramel cake, vanilla-cream cake topped with berries, chocolate cake, and chocolate balls. And if you’re lucky enough to snag a piece of their nut pie before it’s sold out, you can really consider your day a success.

Until the 5 shekel phenomenon took hold, Tel Avivians were typically taken for a ride when it came to iced coffee. Paying 15-18 NIS ($3-5) for taking a coffee “on the rocks” was part of the daily routine, so it came as quite a pleasant surprise when iced coffee made its way to the 5 shekel menu.

These days, we drink iced coffee like the Queen of Sheba — whenever we want.

Take care, though, when you order. The standard iced coffee is more like an obscenely sweet, coffee-flavored milkshake-slushie (not that I’m complaining), but if you prefer your iced coffee on the traditional side, all you have to do is ask, and 5 shekel place will be happy to fulfill your request for an Americano, capuccino or espresso with ice (kerach) for the ever-satisfying price of 5 shekels

Simply put, alcohol is expensive in Tel Aviv.  For the average person, and especially budget travelers, throwing back a few with some friends in this town pretty much means you’re eating processed cheese and crackers for dinner or maybe even foregoing dinner altogether to save some money and make yourself a cheap date.

At CofixBar, though — as you’ve probably already guessed — drinks are only 5 shekels. That’s right, and it’s not just cheap shots. A glass of wine or beer — a FULL glass of wine, a FULL glass of beer — is just 5 shekels, and the selection is premium: Barkan, Goldstar, Johnny Walker, Absolut, Ballantine’s and so on.

It’s really a bit of a mystery how they’re making any money, but it seems to be working. You can find the 2 lone branches of CofixBar in South Tel Aviv. While the majority of the 5 shekel joints are open daily until 11pm, CofixBar is open until 2am, and although closed Friday night and Shabbat, they re-open Saturday night. If there was every a good reason to drink, this is certainly one.

SuperCofix, he latest Cofix game-changer to hit the streets of Tel Aviv — is pretty much tailor-made for budget travelers. At these small supermarkets, everything costs 5 shekels or less and comes in sizes meant for an individuals, which means more savings and less waste.

The first SuperCofix has already opened on Herzl Street in Florentin, and is already on its way to spurring meaningful change, as other grocers are starting to pick up on the phenomenon.