5 Places to visit in Neve Tzedek

There is fascinating history in Neve Tzedek and it’s worth doing a tour there. Famous characters in Israeli-Jewish literature like Agnon, Gutman, Brener, and Rabbi Abraham Kook were all friends and contemporaries there. Whilst there you should also try to study the works of these poets to really get a feel of the neighbourbood and the writers it produced.

In the early years of Tel Aviv, Neve Tzedek was maintained and built up by Tel Aviv. However, in the period until the early 1980’s Neve was neglected. Since the 1980’s though, Neve Tzedek has really improved and has become one of the most charming and sought after locations in the Tel Aviv area.

Neve Tzedek is a real center of culture and has become a yuppie hangout. When walking around Neve Tzedek, you really feel you could be in a city in Europe, with quaint shops, restaurants and cafes. Walking through its narrow lanes and winding streets is a really fun experience.

The friendly and warm atmosphere makes you feel you in a community village. If you want to see the latest in Israeli fashion, come to Neve Tzedek and you won’t be disappointed. Obviously, its close proximately to the beach makes it an ideal place to visit either in the day or night, depending on the type of experience you want.

The Suzanne Dellal Center for Dance and Theatre

One of the most interesting spots in Neve Tzedek. The Suzanne Dellal Center is the home for Israel’s famous Batsheva Dance Company and Batsheva Ensemble and it’s worth trying to catch a dance there. As well as being Tel Aviv’s official dance center and offering very enjoyable dance and theatre performances, there is a stunning piazza and small gardens around the building.

Rokach House is one of the first houses in Neve Tzedek. It belonged to the Rokach family. In the 1980’s like much of Neve Tzedek it was refurbished and restored.

This house was built by Aharon Chlouche in 1886. It was sold to an Israeli business developer and since 2003 has been an art gallery. It contains temporary exhibitions with a definite European taste and style. From the rooftop you have a beautiful view of Neve Tzedek.

Nahum Gutman was one of Israel’s most well known artists. The Gutman Museum, dedicated to Nahum Gutman is in a building known as the Writer’s or Editor’s House. It is the result of what Hemi Gutman described as, “”15 years of blood sweat and tears”". Only a small portion of the permanent collection of several thousand works are on display at any given time. Located in the Neve Zedek, area of Tel Aviv (see Route #1, Orange Routes article) the building was originally built in 1887 in one of the first neighborhoods outside of Jaffa.

It housed the editorial board of the `Ha’poel Ha’tzair’ (Young Laborer) newspaper between 1907-1914 and was home to Y.H. Brenner, Dvora Baron and Joesph Aharonovitz.

His works deal with experiences in Jewish History such pogroms, the Holocaust, etc. Gutman was not only preoccupied with painting but also with writing.Many knew him best for his drawings and illustrated children’s books. He once wrote, “”This person (myself) occupies himself, as it were, in two lines of work, but in truth only does what his heart desires, namely one.”"

Gutman wrote and published prose, mostly short stories and children’s tales, on which generations of Israeli children were raised. He was the recipient of numerous prizes and in 1978 received the Israel Prize (Israel’s highest accolade), for his contribution to children’s literature.

There are several cafes, bars and restaurants in Neve Tzedek worth enjoying. In the Suzanne Café you will find friendly café with a terrace near the Suzanne Dellal Center. In the Michelle Bar you can have a nice breakfast. In the evening they also have live acts there. Nina is a vegetarian café in a cozy corner location and Bellini is a popular Italian restaurant with an open kitchen and stunning views.

There are two hotels worth visiting whilst in Neve Tzedek, the Dan Panorama and David Intercontinental.

Both have a great views of the beach and the Mediterranean Sea. 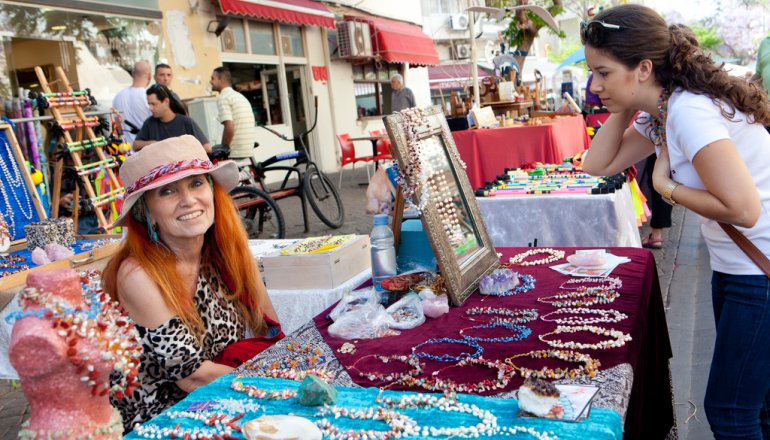