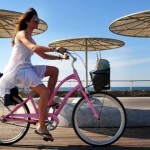 You won’t see any ships docking in this harbor, but rather a wave-like wooden deck promenade lined with some of the best restaurants, shops, bars and nightclubs in the city.

The story of Tel Aviv port (“the Namal” in Hebrew) began way back in the 1930’s after riots in Jaffa brought about the need for a new shipping port and eventually resulted in the establishment of the northern Tel Aviv Port, known as the Namal.

However, with the opening of the Ashdod sea port in 1965, the Namal became an afterthought when it came to shipping, but after many years of neglect, it has been renovated into one of the most fashionable hangout places in the city. It’s home to an indoor farmers’ market that hosts more than 50 different food producers from all over the country, popular Tel Aviv Port restaurants like the Kitchen Market and Mul Yam and even a vibrant nightlife scene with establishments like Galina Bar, Uptown dance bar and Shablul Jazz Club.