In Tel Aviv, a city blessed with delicious food (among other amazing things), it sometimes gets hard to choose what to eat. While there’s plenty of great restaurants in Tel Aviv worth sampling, sometimes you’re just in the mood for something quick and “dirty.” Typically, that involves an out-of-this-world falafel, or a mind-blowing sabich. Both are great, but it’s a lot more than what’s just on the inside of these pita-paradises that causes locals and foreigners alike to lose their minds over what to order.

Before I ever came to Israel, I knew that I would be tasting some authentic falafel. After all, you can’t go to Israel and not have a falafel. It was only by the good will of a dear friend that I was introduced to sabich at a bustling restaurant near Rabin Square called ‘Frishman Sabich.’ 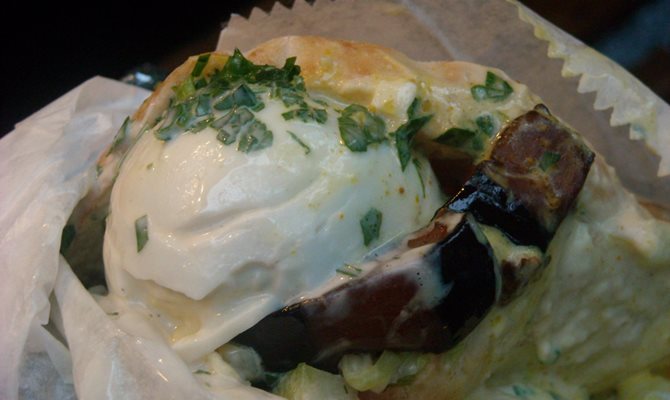 I was beside myself. What was this food and why on Earth had I never been introduced to it before? Why was it that the falafels and the shwaramas of the Holy Land were overshadowing this? It was then that I realized how difficult it might be for one person to choose between the traditional and loyal falafel, and the new guy on the block, the sabich. It’s like hot dog vs. hamburger, taco vs. burrito, grape juice vs. Manischewitz, cats vs. dogs! Sometimes, you just can’t decide.

A falafel has a few chickpea balls thrown into a pita with some tahini, hummus, israeli salad, and maybe some fries here and there. You can add all types of different fillings and toppings, but then you’re straying from the classic version.

Sabich, on the other hand, still has all the excitement going on inside a pita bread, but instead of falafel, you’ll find a hard-boiled egg, roasted eggplant, amba, sometimes pickles or another vegetable, and Israeli salad.

Which Is More ‘Israeli’?

The falafel has been around in Israel since the days of the pioneers. Though the food doesn’t come from Israel and most likely came from Egypt, the Israelis were the first to put it in a pita and eat it like a sandwich. It’s completely Mediterranean, completely vegan, and completely Israeli.

Sabich came from the Iraqi Jews who immigrated to Israel, and it’s said that they used to eat it on Shabbat morning. That’s not a surprise, as ‘Sabich’ in Arabic is ‘Morning’.  Like the falafel, someone saw the Iraqi Jews eating this, and decided to shove it in a pita, add some Israeli flavor, and sell it to hungry people on the streets of Tel Aviv and other cities.

Falafel has been around longer, but sabich has more ‘tradition.”  That being said, falafel is Israel’s national dish, so therefore, that probably makes it more ‘Israeli’. However, it’s only a matter of time before the sabich might surpass its counterpart.

Where to Try for Yourself

There’s places to try sabich and falafel all over Tel Aviv, and many places like Frishman, for example, offer both, making it easier to try this competition in one sitting. However, there’s nothing wrong with spreading out this game to all of Tel Aviv.

That being said, some of the best places to try falafel in the city are Falafel Banin Johnny, Hakosem and Gabai Falafel. These are probably the most famous places for the food in all of Tel Aviv, and they come at a reasonable price. Though, you might have to wait a bit for the one at Gabai, as this secret has long been out. If you care about the quality of your chickpeas, then Hakosem guarantees you’re falafel will be made with only the highest quality chickpeas from Spain.

Lastly, if you like love in your falafel, then Yahaloma, an Egyptian eatery, makes a special falafel only twice a week.

Once you’ve cleaned your palate, it’s time to try sabich. Sabich Oved is Tel Aviv’s most talked about sabich restaurant these days, and there’s no other way to describe it unless you just come here for yourself. Another is Sabich Tchernichovsky, where from the second you walk in, you’ll know these guys are doing everything they can to make YOUR sabich amazing. They even put in their own ingredient, red cabbage, for a little unique spin on it.

And, The Winner is…

Sorry to disappoint, but of course — there’s no winner! I guess we would make terrible judges…

While the question has been debated by many foodies and friends just going out for a casual meal, all street food is in the eye of the beholder — nobody could ever pick just one. If you do, you feel like you are literally hurting the feelings of the other, or at least of the friend who has a difference in opinion. For some, choosing is easy. For others, it’s a more serious and stressful matter.

Falafel and sabich are both delicious renditions of historical foods, that people far and wide have fallen in love with. Do we all have our preference? Of course, but I won’t say what mine is. Once you’ve discovered what you prefer (if you do prefer one), go on a scavenger hunt to see which restaurant serves up the best version of your favorite. Maybe it will change your mind of what you thought you liked better!

Your best bet is to just try all the street food and go home full and happy!